Official ASP.NET 5 documentation contains a tutorial how to use Grunt to compile LESS files to CSS style sheets on the fly every time you build your app. I’ll should you how to use the same task runner to compile TypeScript code to JavaScript as part of your app build process. 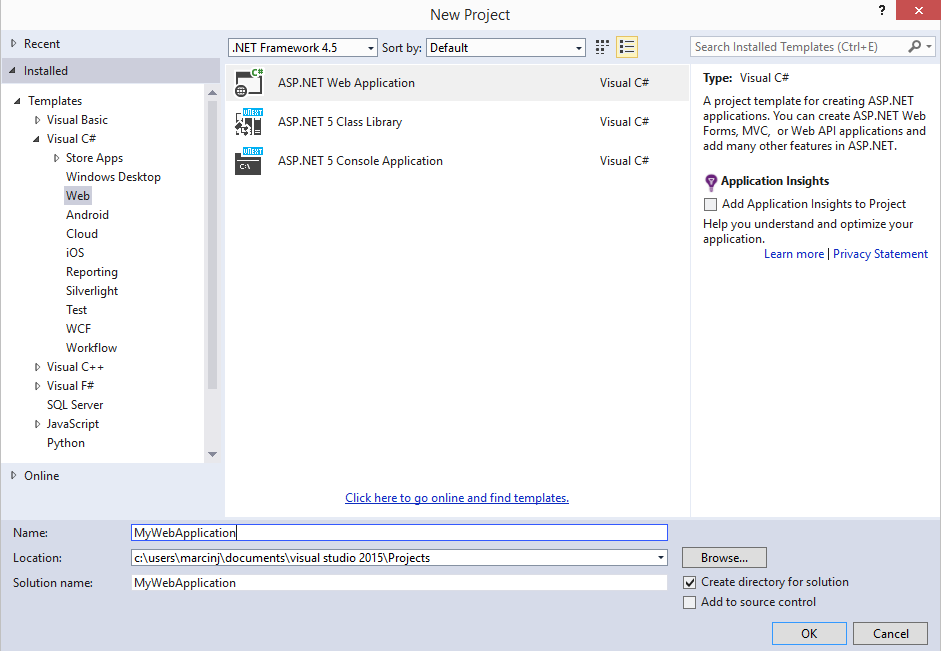 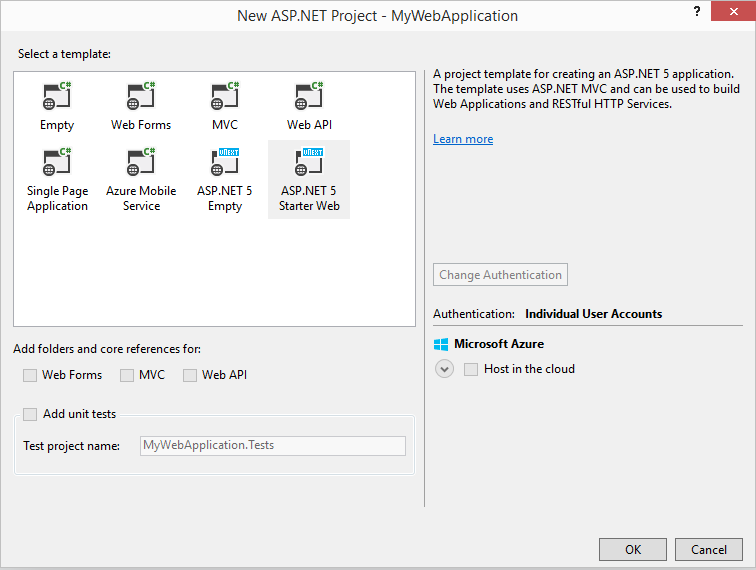 As you will probably notice when solution is created folder structure is quite different than what you should know from previous ASP.NET projects. However, I will not focus on describing what’s the role of particular folders and files. You should know that there are two files important for Grunt: gruntfile.js and package.js. 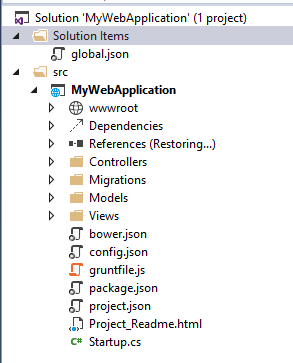 But we’ll get to them later. Let’s create TypeScript file we’d like to compile. I’m going to create new directory in the solution called Scripts. It will be place for all TypeScript files in my application. To keep things simple I will create just one file: myApp.ts which will have a simple TypeScript function. Unfortunately TypeScript is not available within New Item dialog. You have to pick different one (e.g. Text File) and manually change file extension to .ts. 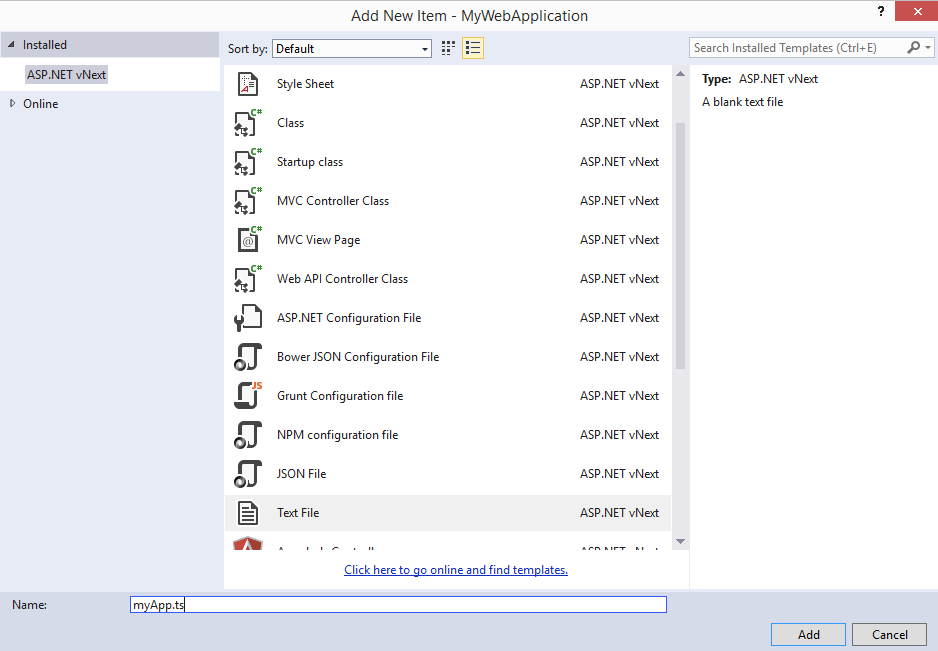 After doing so you could see new file in solution explorer

Function I’d like to compile to JavaScript is really simple

OK, back to package.json and gruntfile.js. We’re going to use package.json to import grunt packages that will perform TypeScript compilation. Packages we need are grunt-typescript and typescript and we can add them by modifying package.json file. Visual Studio editor will help you with nice intellisence suggesting correct package name and latest available versions. 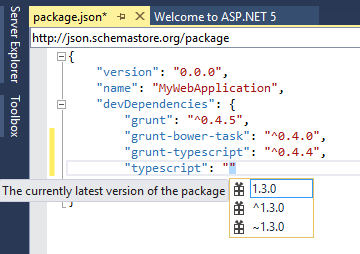 Now we have to download the packages using context menu invoked when right clicked on NPM in Solution Explorer and selecting Restore Packages.

As you’ll notice both packages added to package.json will show up on the list as (not installed). That comment should go away when you restore the packages.

So we have the packages declared and they are successfully added into the solution and restored. Now we have to declare the task that will actually perform necessary compilation. To do that we have to modify gruntfile.js content. There are two thing that needs to be added:

– Package instalation code, at the end of the file – Package task definition within grunt.initConfig

Now we can run the task to make sure it does what we want it to do. There is a new window added to Visual Studio called Task Runner Explorer. You can invoke if from View > Other Windows > Task Runner Explorer. It’s show you all tasks defined in your solution, let you ran them and set bindings to run tasks automatically pre or after build. Right click on typescript and select Run to run the task and compile your TypeScript code to JavaScript. 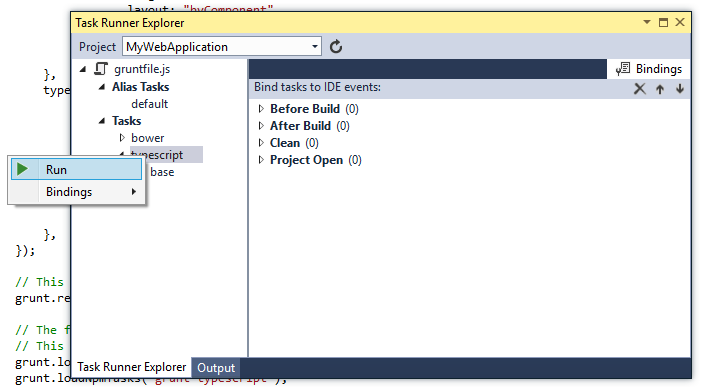 If you did everything right you should see run results saying  that wwwroot\app.js file was created 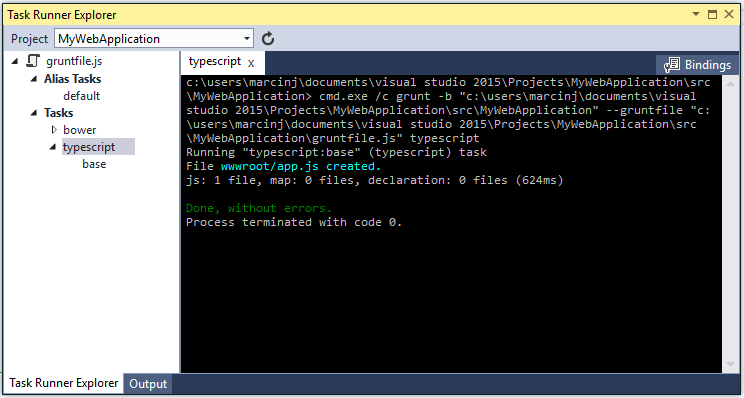 and new file should show up in Solution Explorer

It will contain our TypeScript function compiled to JavaScript:

To make it more natural you can set the task to run every time Build is performed Using Bindings > After Build option.

To confirm that it works you can either change source in myApp.ts and rebuild – app.js content should change as well. You can also remove app.js. Performing a build should make it appear again.